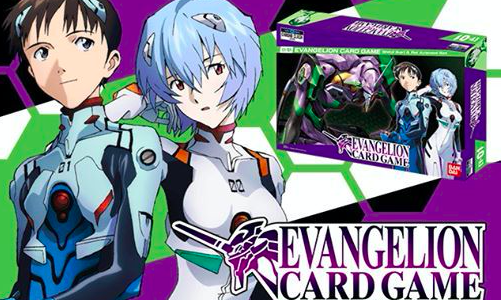 Join us for a demo of The Evangelion Card Game! We will provide you with a demo deck to play, explain the rules of the game along with the game plays. Get a few games in and see if this is the next card game for you!

What is Evangelion Card Game?
The Evangelion Card Game is the third series expansion for the Chrono Clash System. Years ago, the Earth was attacked by unnatural creatures called Angels. To defend the people against the next Angel attacks, the world’s governments and Nerv built the Evas, giant mechs of unknown power.

The Chrono Clash System is a fast paced, living card game in which players alternate back and forth making big attacks and summoning even larger creatures. The bigger the attack or creature a player plays during their turn, the more resources they give their opponent for their next turn.Each player, using the cards he has on hand, tries to achieve the Consummation of one of the main characters in the Evangelion universe: Shinji, Rei, Asuka, Misato, Ritsuko, or Gendou. Join Shinji, Rei, Asuka and Kaworu for an exciting card battle!

What is the Chrono Clash System?
The cost of the card moves the marker towards the opponent’s side, and when it goes over 1, then it’s your opponent’s turn!
Play many low cost cards or play a high cost card from the get-go.
Play your favorite cards whenever you want in this dynamic but easy to play game!

All gameplay effects are shown as icons.
So whether playing strategically or casually, all fans can pick up and play a game with ease.

There are 2 ways to win with Chrono Clash System.
1: Whenever a player is attacked while they have no guardians, they are eliminated from the game. The last player standing wins the game!
2: If you ever have 5 or more completed quests, you win!

The path you take to victory is up to you! Experience the heat of battle in a game with 2 different victory conditions!