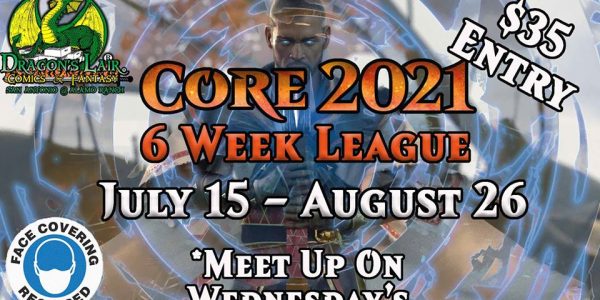 Leagues are all about being able to play whenever you have time for a match, and being able to maintain your record without having to play all of your matches in one sitting. Join us for our Core 2021 league whenever you or your other league mates have time. We will dedicate Wednesday evenings for you to meet up with other league players but, you are welcome to come in for a game anytime.

The Magic League works as such:
1. Players open up one Core 2021 prerelease kit and use those boosters to build a 40-card deck to start off with.
* The players deck must adhere to the rules of the current standard format
* After three weeks into the league (August 5) a 60 card deck is the requirement.
2. Every week, players add booster packs to their pool and rebuild their deck as often as they like.
* Players can buy 1 booster pack for $3.00 a week.
* Players can also add a booster for $3.00 after three losses, twice per week.
* The total amount of packs to be purchased weekly for $3.00 is three.
3. Matches consist of a single game.
*Each player gets one free mulligan at the start of the game.
4. Players can only play against other players in the League for their games to count.
5. All decks will be held in the store for the duration of the league, you may take them home at the end of the league.
* We will provide match cards for you to track all of your wins and losses.
* The league lasts six successive weeks. From July 15th thru August 26.
* Players can join the Magic League up until the League close date of August 5th.
*In addition to their initial prerelease kit they are allowed to purchase boosters for the weeks they missed.

League End / Tournament Date – This is the last day of the tournament in which we will have a Final Tournament at 6:00pm. You will bring your A game and battle off with the deck that you have made over the last 6 weeks. All prize support will be given out based off of the tournament results. We will be awarding packs, promo packs, and collector packs. Pack payout will be determined on August 5th when we have a final count of the number of people in the league.

Covid-19 Safety Rules:
• Your temperature will be taken through an infrared thermometer therefore there is no inconvenience to you. Any visitors with a fever will be asked to visit us at a later time.
• A face covering is required to be worn through the whole event. For everyone’s safety face masks are a requirement to be in the store.
• Please wash hands before and during the event. Hand sanitizer is located at the front of the store as well as in the play area.
* These rules are in place to ensure everyone’s safety and may be adjusted at any time.